i know i update this thing waaaay to often. i get a bit carried away with myself.
but heres more robo-art.

these were done using Manga Studio, which i have decided i love, because, as opposed to photoshop, i can actually draw in it.
it makes me feel good inside. 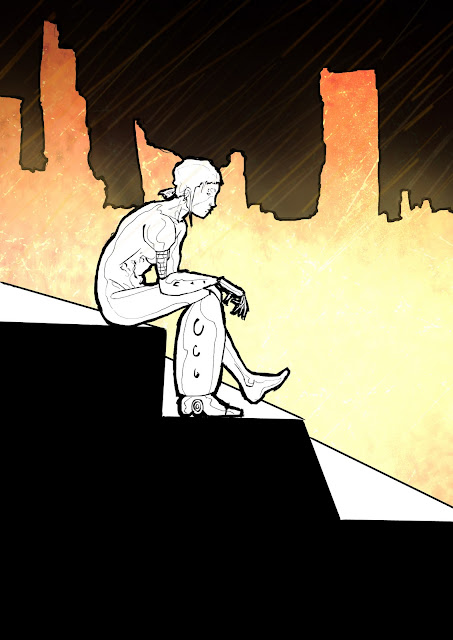 above: used photoshop to get a bit colour in it

below: tried to use photoshop to get colour in it, but it looked rank. so, no colour. 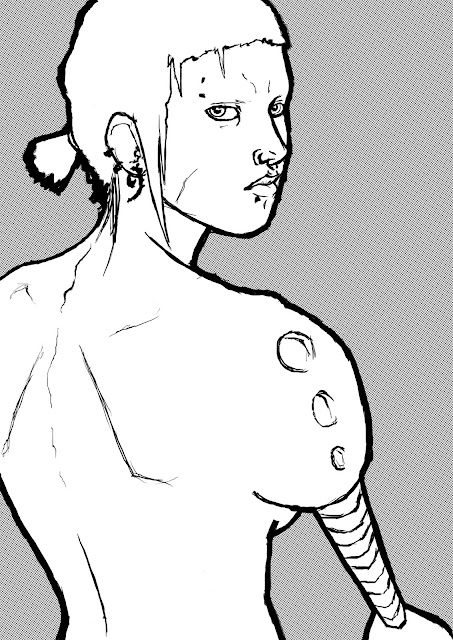 the humans are dead
the human are dead.
we used poisonous gases, and we poisoned their asses.

affirmative, i poked one it was dead.

HUMANS: THEY HAD IT COMING

this is the post in which i give an overview of the state of the world my comic is set in.
my longest post yet. hang in there, theres pix at the bottom.

robots were sick of being slaves to humanity, so they revolted. it was going fairly peacefully until the military took violent action against the robots, that turned peaceful protests into a war.
both sides started making weapons to wipe out the other.
humans started experiments on their own kind, to make "super-soldiers": half robot, half human. But before scientists could perfect their weapon, the robots unleashed a bio-chemical weapon that almost destroyed the human race.
it killed most of the population, and mutated some survivors into feral creatures. others were immune to its effects. (the same impact was had on animals.)
robots now colonise in certain cities, but left others to crumble. the abandoned cities is where small pockets of humanity fight for survival.

a government group set up an experimentation facility. as far as the public was concerned, it didn't exist. this group abducted civilians as subjects for their work on perfecting the "super-soldier" weaponry. once perfected, they would then use willing soldiers from within the army to become human/robot hybrids.
this group only abducted people whose disappearance would not raise great suspicion, which is why they had to research their targets.

one of these targets was the main character. she was stalked by this group for weeks. they planted bugs in her house, and monitored her activities. she started getting suspicious and scared, so she phoned the police. they said they would handle the case, but she never heard back from them. until one night, when the group decided to abduct her. she fought back with unexpected venom and strength, and almost got away. a police car showed up to the scene. thinking they'd come to rescue her, she cried for help, but the police knocked her out and helped load her into a van.
she woke up strapped to a metal table.

years and years after the war, a small group of young humans, who scavenge for food and supplies in different cities, found out about a secret military facility after poking around abandoned government buildings. they managed to find the facility, and found the main character hooked up to machines, in some sort of cryo chamber. they took her back to their base camp near by, while others stayed to find answers about, what looked like a torture chamber, they had just uncovered. the hybrid lay unconscious for weeks, often tossing, turning and screaming in her sleep.

after awakening, she was often plagued by nightmares and flashbacks of what was done to her and the pain she went through during experimentation. she resents and hates what she has been turned into.

that is the general stuff of what has taken place in either the future, or an alternate universe (where everything is the same within the world except technology is far more advanced)
i dont have a plot, know where in the timeline im going to take my comic from, but i think i have a lot of material to work with. so i'll give it more thought.
any and all feedback is welcome! feel free to give your opinion or maybe some ideas!!!

this is the sort of look i want to go for: 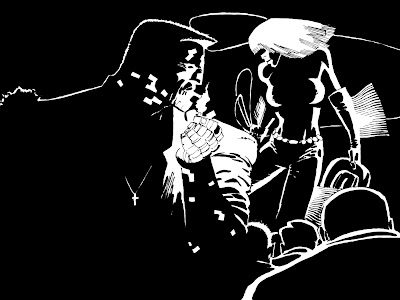 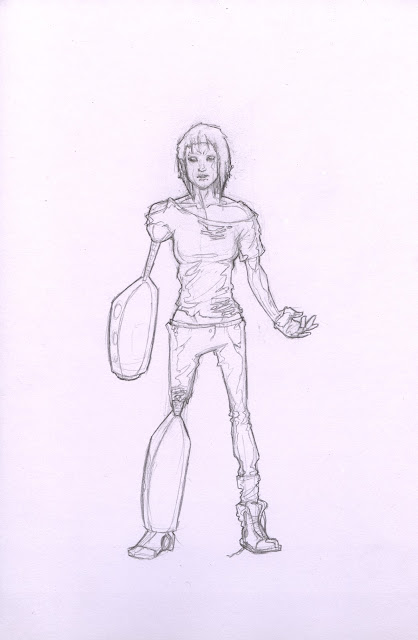 this being a blog for me to keep track of my uni work, i figured i might as well put up something from uni.

im doing a COMIC ART AND GRAPHIC NOVELS module along side animation. basically, i've to do 2-6 pages of an original story that would be published in a comic anthology. you can either work with a writer and use their script, or do your own. i've come with my own story. im not going to type it all at the moment, because i cant be arsed, so theres a sketch of the main character instead. be grateful anya. 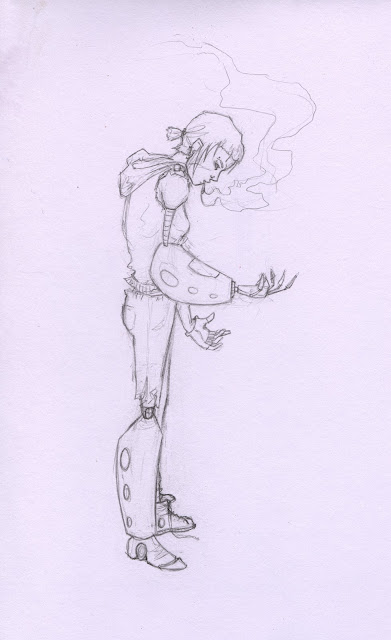 and this ones less good, so its at the bottom. 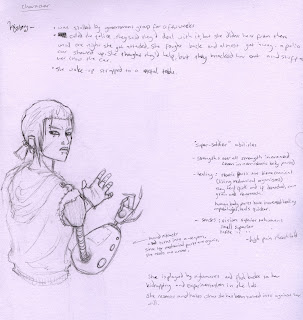 NEXT TIME:  i post pictures of my character designs for the animation im doing at uni, or maybe the story idea for my comic. which will it be?
you'll have to find out next time! oh what folly!

today was the first official day of 3rd year. and tomorrow is the "idea pitch" thingy.
when life shits on your head, it doesnt really make you want to go to uni, but needs must when the devil vomits into your kettle. (little bit of black adder for you there)

and since this is space is been reserved for art-stuff, here is something i drew in the merry holidays: 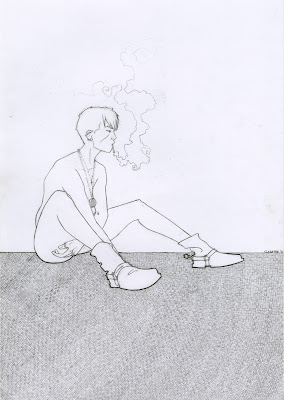 you could claim she is tank girl, but shes not. we swears on the precious! 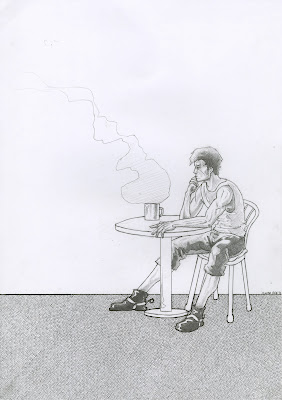 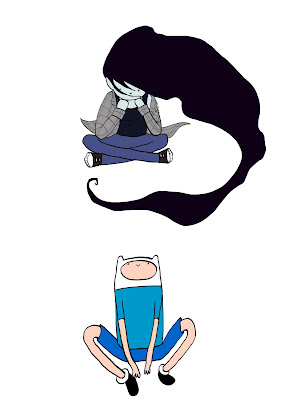 and a sucky picture of Finn and Marceline to bid adieu
Posted by Claire Roe at 10:27 0 comments

so soon? yes. and here is some uni related work to boggle your brain pot:

some character sketches for my animation idea. he's a sort of vigilante guy with a questionable sense of morals. i want to do a fun animation with action in it, so im thinking there will be some cool building jumping to retrieve a stolen artifact from some government people. 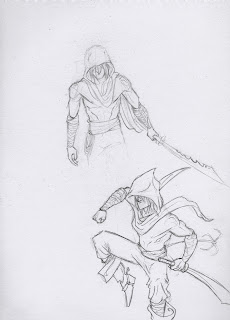 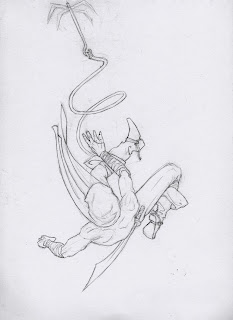 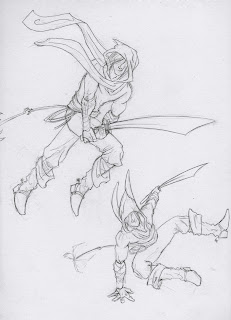 hes fun to draw. and hes like slicker than the guy with the thing on his eye, oh.

on a completely unrelated note... (well its still art related). here is a drawing that i could paint, but might not because i will ruin it 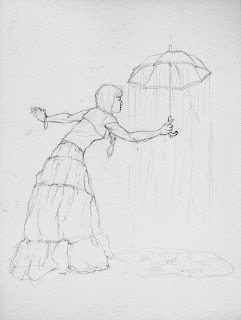 its raining from the umbrella! how peculiar.

DRAWINGS OF PEOPLE AND SOME WORDS

i've moved into my new house, and have been trying to get work done for next week... which isnt going too well so i drew this! 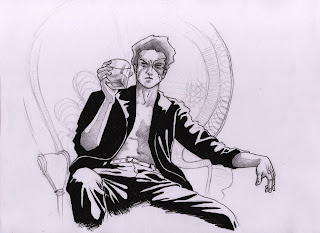 gave him a prince zuko scar... because he suits it...

and since i dont have anything else to indulge your eye holes with, here is some observational drawing! yay! lucky you! 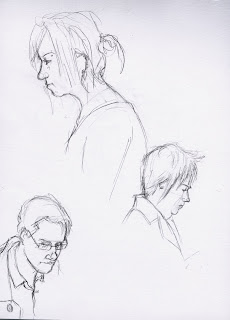 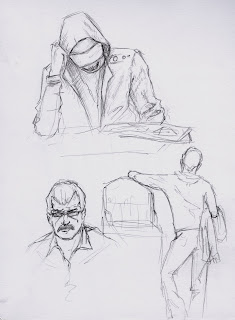 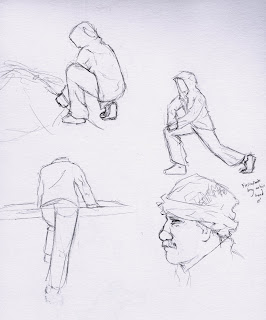 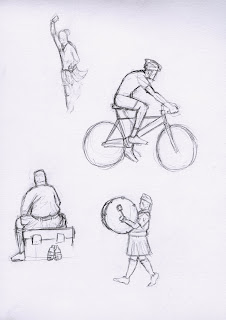 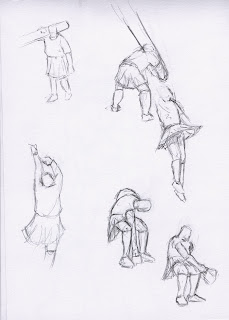 its almost the start of a new semester, and creating a blog is a requirement (...i think?)

so i'm just going to pretend that people read this (so it doesn't damage my ego) and post drawings and work or whatever.

enjoy it! gorge yourself on my scanned-in sketches of dubious quality! go on! 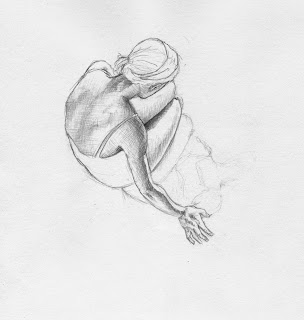 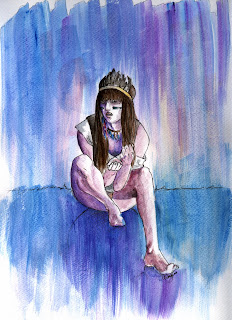 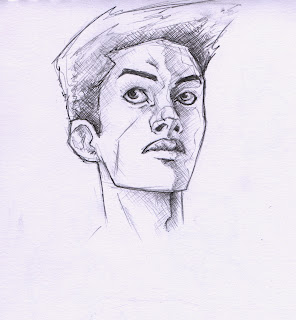 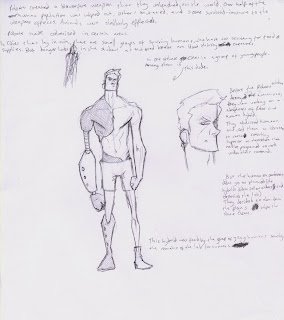 THE HIDDEN SONG AT THE END OF THE ALBUM 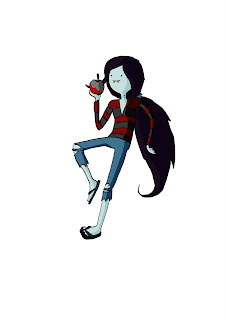